Usually, there is nothing better than escaping February here in southwest Virginia and heading south.  This year, maybe it wasn’t such a contrast as we have been playing golf here all winter, but it was still nice to pack the clubs and head to Hilton Head, Isle of Palms and Kiawah Island and play new courses with old and new friends.  My new single length F7 irons missed Hilton Head, but they got a good workout at the two courses at Wild Dunes on Isle of Palms and Turtle Point and the Ocean Course at Kiawah Island.

We were at Isle of Palms thanks to our friends Colin and Jan who rent a house there for the month of February.   We eat well, drink wine, talk politics and play golf.  Have I mentioned how nice retirement is?  Colin and I played the Harbor Course first. It’s a nice resort course- lots of riding in carts to get between holes and fairly generous fairways, but it’s no pushover. I’ve played it enough times now that it feels familiar.  The Links course lost the beautiful par 5 18th hole to beach erosion a couple of years back.  It has been replaced by a nice par 3, but it just isn’t quite the same.  I had forgotten what a nice layout the Links course even though there are only a couple of holes that let you see the ocean.

My scores were 81 on the Harbor Course and 74 on the Links Course.  The day on the links course was one of those “in the zone” rounds with several birdies and no major errors. The Cobras held up well.  Short iron trajectories are very high but I am starting to like that.  My Wilson Staff Duo orange balls were sticking on the greens like Pro V1s.  I just wish the Links course wasn’t such a premium over the Harbor Course or I would choose to play it more often.

If you read my post from last year about the Golf or Gourmet package at Kiawah, you will understand why I was very excited that Linda and I were able to book two nights in at Kiawah after Isle of Palms. Even better, this year we paid the extra $100 for one of the nights that is the premium for the Ocean Course. That’s just $50 each extra- a great deal.  If you get a chance to play this world ranked Pete Dye layout, don’t miss the opportunity.  The Ocean Course hosted the 1991 Ryder Cup and the 2012 PGA Championship. This year, in late February, it was in perfect condition with fairways that had lots of run and beautiful, quick greens. Walking is mandatory in the morning which made for a quiet and beautiful round of seaside golf.  They didn’t make us take caddies which made the package deal even more of a steal. Linda and I paid $500 plus resort taxes and fees for two nights at a condo near the Sanctuary Hotel and two rounds of golf, one on the Ocean Course. (Linda gave her Ocean Course round to Colin who drove down from isle of Palms for the 9:20 tee time.)

Linda and I played Turtle Point the following morning. I had played the course many years ago and didn’t remember very much.  It’s a nice and challenging layout with quite a bit of water, alligators and many beautiful marsh birds.  And of course a few turtles..

The Cobras worked pretty well at Kiawah- an 83 on the Ocean Course and an 81 on Turtle Point.  My favorite shot was a classic links 5 iron that ran out over 200 yards and left me with an eagle putt on #7 at the Ocean Course.  Needless to say, I three putted. Linda took lots of nice pictures (mostly birds and alligators). Here is one of them. 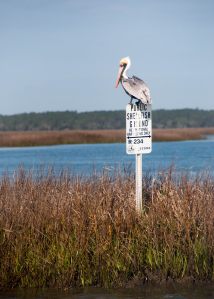