I have a garage full of old blades from the 50s to the 80s. Periodically, I pull them out, throw them in my Ping Moon bag with a persimmon driver and fairway wood and go out by myself for a quick 9 holes. I have offered this experience to my friends- all of us are over 60 and so grew up with these sort of clubs- and none have take me up on my offer.  I can’t imagine why someone wouldn’t want to play with old rusty clubs that are too short and impossible to hit…

I like golf clubs and have bought a whole lot of them- way too many, in fact. But I always carry this suspicion that most of the stuff you hear about irons is just hype. Anybody can adjust the loft of a PW to 44*, extend the length by 1/2″ and wait for golfers to marvel about how they hit these “at least a full club longer than my old set.” That’s because your PW is really a 9 iron, pal! That’s why you now carry a gap wedge. There’s nothing wrong with ditching long irons for hybrids and adding wedges to your set- I do that too with my normal set that I use. (Wilson Ci 4-GW- $140 new). But the sometimes purist in me keeps whispering that there is something wrong with all of our emphasis on club technology, precise yardage devices, swing aids and all these golf gimmicks that promise us length and accuracy. I leave the modern golf ball out of this discussion because the improvements there are so obvious and it would be very hard (for me) to return to the balata days. So I openly admit my inconsistency and occasional hypocrisy.  But my suspicions remain.

Before I get rid of my stash of rusting antiques, I decided to take a bunch of them out on the course and see what they can do. Vintage Steel Shoot-Out!

Vitals: I am a 63-year-old male and have played golf off and on most of my life. I am presently playing the best golf of my career (what a great game). My handicap index jumps a round a lot- from a recent low of 2 (very unusual) up to around 6. I drive the ball around 230-240 yards and hit a 7-8 iron from 150 yards. I am a decent, but not exceptional ball-striker. I am a grinder and when I play well it’s because I am getting up and down and making good decisions and making the occasional birdie putt. I don’t “work the ball” and I change swings and clubs often. I don’t practice unless I absolutely have to. I just love to play.

“Compact, traditional blade with diamond back design. Black “flame ceramic” face with red diamonds along scoring lines. On sole: iron number, MacGregor (in script). On back: CF4000, Tourney, M2, M over T inside a circle of hash marks and arrows on each side. Hosel has double rows of X’s. “(From: ironfinder.com) 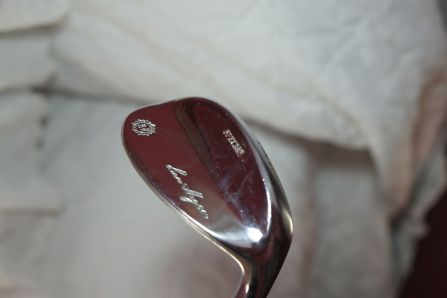 These clubs were a mess- lots of rust on faces, some pitting on shafts, broken or missing ferrules. I pulled them out of the basement today and cleaned them. This is a good first set for the vintage steel blog- they are classic, hard to hit blades from the early 1960’s. In case you are math-challenged, that’s over 50 years old! I doubt I could sell the set (matching 2-PW) for more than $10. They aren’t the kind of blades I usually prefer- toe heavy like many of the old Wilson staff irons. They are also quite short. I normally play a 5 iron that is 38.25 inches. These are over an inch shorter. So everything worked against these clubs, including the fact that I went on the course without even hitting them once on the range. 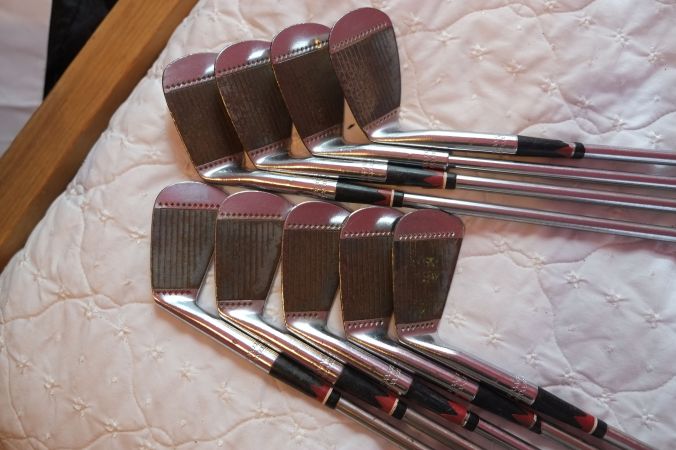 I played the “senior tees” (2924 yards) on the Front 9 of my home course- The Pete Dye River Course of Virginia Tech- and played two balls- a yellow Srixon Z-Star XV and an orange Volvik crystal.

Hole #1: Relatively benign- 325 yards. After two good drives, I had about 110 yards to the pin, but into a decent breeze. I hit the yellow Srixon first with a 9 iron (my usual club would have been a gap wedge). The shot was a good one but landed short. I switched to an 8 iron and hit the Volvik in the middle of the green- just missed the birdie putt.   Got up and down with the old Hogan sand wedge for a par with the Srixon.   So far, so good.

Hole #2: Tough par 4 (376 yards) with water on left so you tend to hit right and add yardage to the hole. I did. I had 200+ yards still to the back pin and decided to wade right into it and hit three irons. One (yellow) was a squibber- short and right. The other (orange) was a bit better but still well short of the green, but in the fairway. Into a stiff wind, I left the green ball on the bank of a front-side bunker and failed to get up and down- double bogey 6. I two putted the orange ball for a bogey. One up, orange.

Hole #3: Par 5 playing long into the wind with the New River on the right and bunkers on the left side of the fairway. Two decent drives, one in the fairway and one in the left rough. Pulled out the three iron again as I am not carrying a fairway wood. The yellow ball was struck a bit better than last hole but faded into the long trap that lines the right side of the fairway the entire second half of the hole. Hit the orange ball in the fairway about the same distance. Had 150 yards, more or less, to the pin. I hit two 6 irons. The orange ball rolled towards the back of the green and the sand shot came up just short and right. Failed to get up and down with the yellow and 3 putted the orange (uuggh!) for two bogeys.

Hole #4: 360 yard par 4, dogleg left. There is a lake on the left and out of bounds on the right, but a fair amount of room for the drive. Orange ball was hit low and didn’t make the hill so it was going to be a layup, as I couldn’t hit enough club to reach the green and still clear the hill just in front of the ball. The yellow ball was in the fairway. I hit a good 9 iron with the orange ball and left myself a short sand wedge to the green. Missed the par putt. I snap-hooked the yellow ball into the lake, took my drop and two putted for another double. Two up, orange.

Hole #5: This is a straightforward par 3 of 154 yards to a slightly elevated greens with bunkers to left and a fall off to right.   I hit two pretty good 5 irons here. The first rolled just off the green back/right and the second rolled off the back. I should have hit a six iron to the back pin, I think. I got the orange ball (easier shot) up and down for a par and missed my par putt with the yellow ball. Three up, orange.

Hole#6: Fairly short par 4 and a relatively easy driving hole.  All the trouble is around the green.  Green presents its narrow side to most approach shots and there are drop offs on either side that almost guarantee a bogey or worse.  Drove the orange ball low and left into a bunker.  Had to pop it out well short of the green.  Chipped on and two putted for a bogey.  Hit a nice drive with the yellow ball.  Hit a good 8 iron into a middle pin.  It stuck beautifully, but I missed the birdie putt. Two up, orange.

Hole #7:  A short par 3 to an elevated green with bunkers in front and back and a cross wind blowing. Hit an 8 iron to a back pin.  Orange ball on the green, yellow ball off to the left.  Hit a good chip with the yellow ball and missed my birdie putt with the orange ball.  Gave myself the two par putts as I had someone on the tee waiting for me to play out my two balls.. Two up, orange.

Hole #8: A simple par 4 if you avoid bunkers on your drive and hit a reasonably straight shot into the green.  Did that and was left with birdie putts with both balls.  Missed, of course.  Two pars.  Two up, orange.

Hole #8: Short par 5 and pretty easy if you keep the ball in play. Did that with the yellow ball and got a routine par.  Hit a decent three iron for my second shot. My 3 iron with the orange ball landed in a faiway bunker up against the lip, so I had to just blast it out.  Chipped onto the green and three putted for a double.

Blades are hard to hit, but the shorter shafts help make good contact (especially with shorter irons) more likely. The forged heads feel great when you do hit them even on the clubs this old and this ugly. Considering the jacked-up lofts on most modern clubs and the shorter shafts on these classic MacGregor blades, I was not surprised that they were often 2 clubs shorter. I think, though, that I might be able to use the 7 iron as my 150 yard club once I got used to them. I now use an 8 iron. Since these two clubs are likely close to the same loft and the modern 8 iron is more than ½” longer than this MacGregor 7 iron, I have to tentatively conclude (more data needed) that the old blades really don’t give up much to the modern irons, provided they are struck well. I doubt people will believe that, so I’ll wait and see before I draw firmer conclusions.   Despite the fact that these clubs are not very pleasing aesthetically, I really didn’t think about that on the course. They felt really good and the old Avon Chamois grips reminded me of why I always liked those grips when I was younger. They are still very tacky and comfortable. The greens had received a fair amount of rain the night before, so it was hard to judge the spin on the irons, but they certainly held these softer greens very nicely.

I think it was mistake to use an old putter- it introduces too many variables into the equation. So I will use my regular putter (whatever that is week to week) from now on. I think that would have saved me at least two strokes with both balls. I’ll continue to use an old sand wedge (no lob wedges) just to stay in the spirit of the challenge. I will also continue to leave out a fairway wood so I will be forced to try to hit long irons and see if I get any better at it.

In conclusion, I could play these irons if I had to, and not suffer that much for it. Or am I being too optimistic?  But it sure was fun!