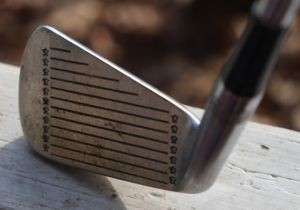 I described the front 9 of my home course in the first post, so I’ll just summarize the results here.

Overall I didn’t like these irons as much as the previous McGregors. That surprised me, as I usually like Wilson irons.  I think the difference is that these irons had shipped long (38″ 5 iron) and the swingweight was a whopping D9. I suspect that made them feel heavy and a bit unwieldy.  As I got used to them, I did hit them better. The thing with these old blades is that misses cost you a bit.  If you are a confident chipper, that may not matter too much.  If not, you will lose strokes.

I had 3 three putt greens this round using my regular putter which was very annoying, including two bogeys on the par three 7th after hitting almost identical nice shots to the middle of the green.  Somehow I managed to three putt both balls!